Home > About a fuel cell

About a fuel cell

A fuel cell generates electricty through the chemical reaction of hydrogen and oxygen.

What is a fuel cell?

A fuel cell is a device that generates electricity through the reverse electrolysis chemical reaction in which hydrogen and oxygen react to produce water and electricity. The fuel for fuel cells is hydrogen and oxygen; hydrogen can be a gas from water electrolysis, or produced by reforming natural gas, petroleum or methanol, while oxygen is taken in from the atmosphere. As it generates electricity, the fuel cell also produces heat, so high hopes are held for its commercialization and application in a diverse range of applications as a new highly efficient energy system.

Mechanism of a fuel cell 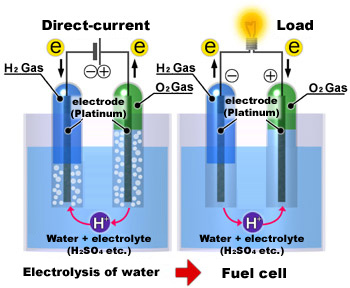 Basic structure of a fuel cell

The component unit of a fuel cell is called a "cell" or "unit cell." Similar to a flat dry-cell battery, a fuel cell consists of a cathode (air electrode) and an anode (fuel electrode), as well as a thin plastic sheet (electrolyte) placed between the two electrodes. There are numerous fine grooves on the air and fuel electrodes, and a chemical reaction occurs when oxygen (i.e., air; oxygen accounts for approximately 20% of air in terms of volume) and hydrogen (which is obtained by decomposition of natural gas, a material for city gas) supplied by an outside source pass through these grooves. Hydrogen is fed to the anode side of the fuel cell where the catalyst encourages the hydrogen atoms to release electrons and become hydrogen ions, and the electrons travel in form of an electric current. Hydrogen ions diffuse through the electrolyte to the cathode and react with oxygen and the electrons that come back via the external circuit to produce water. The principle of a fuel cell is that hydrogen is dissolved into electrons and hydrogen ions. The movement of electrons through the wire of the external circuit means that an electric current is produced; in other words, electricity is generated. 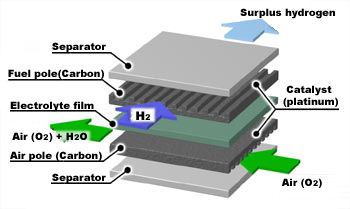 A fuel cell is considered to be a form of "dream energy" that can be used for diverse purposes.

There are four types of fuel cell currently being developed. In line with their respective characteristics, their use ranges from motor vehicles, residential/business and industrial use through to large-scale electric power generation, and for each, fuel cells are seen as a new highly efficient energy system with outstanding environmental characteristics.

Outstanding environmental characteristics
The important principle of fuel cells is that hydrogen is dissolved into electrons and hydrogen ions. The movement of electrons through the wire of the external circuit means that an electric current is produced; in other words, electricity is generated.

High energy conversion
The chemical energy of the fuel can be converted directly into electrical energy, enabling efficient power generation.

High general efficiency
Generates heat along with electricity, and the effective use of that heat can increase energy use efficiency. 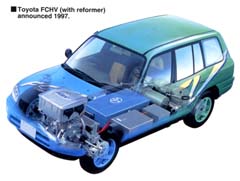